This is the second post looking at spelling lists generated by teachers.* This one, know as the 'Dirty Thirty' came from an academy chain which had noted these as the most frequently misspelt at GCSE and includes many words that come up in our spelling workshops.

The first step to conquering these words is to start with the root then look at the patterns for adding suffixes. You end with an less rhymable 38 words but an easier to teach lest. There are several ways to group these words but the following works well with our principles of developing a spelling conversation around syllables, sounds, graphemes and morphemes then bundling by similar patterns.

The first goal of That Spelling Thing is to show our students how trustworthy much of the language is so I'd get the following words out of the way first. If you can say the word clearly and write each syllable, these words take care of themselves.

quiet - Use a clear spelling voice for the second syllable.

until - Look at patterns for words ending <ill> and <il>.

Next look at split digraphs. These should be familiar from primary school. Make puzzles and physically split the vowel digraphs to put them around the consonant.

minute (adjective) Then talk about the etymology of the noun, 'minute'.

separate (verb) Then move to the adjective.

Next are words that require memory for one grapheme or common ending.

Remember the TST method: syllables - say them clearly - attach sounds to each syllable - identify the tricky bit for you.

Sometimes it makes more sense to start with meaning rather than sound. Move from finite to infinite to definite. 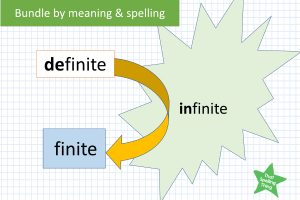 Next are a couple of words that might require memory for more than one grapheme. Bundle them with similar words. 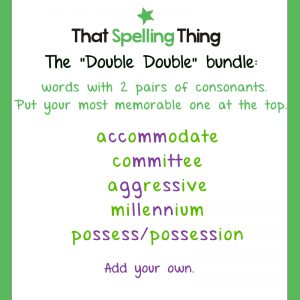 necessary - Mnemonics are a strategy of last resort but 'one collar, two sleeves' helps a lot of students.

Then add endings and note what you have to do.

Do you drop a letter?

Do you double a letter? This should be a lesson in itself, comparing words where you double a final letter (begin, sit, wrap etc) and words where you don't (spend, instruct, talk etc). Sort a list with at least 10 of each and have students discuss and decide what feature seems to be determining the pattern. Let them pretend they're linguists in the field charting a new language.

Do you just add the suffix without changing the root word?

Finally are the words that aren't straightforward. That means they require a spelling voice substantially different from their everyday pronunciation or another strategy altogether. Note that they are 3 of 38. The English code is limited and learnable.

beautiful - Foreign friend. Talk about the meaning of 'beau'

business - Add a syllable for spelling. Let students decide what they're doing to say.

queue - I don't mind if they just learn the letter names for this one word.